Disaster struck Ithaca this Friday night, when it was reported that Mufasa, King of Pride Rock, passed away from injuries sustained after being trampled by dozens of drunk freshmen in Collegetown.

In a statement yesterday, Ithaca Police stated that Mufasa was hunting for food for his family on College Ave around 10:30 pm on Friday, when nearly seventy intoxicated freshmen exited a TCAT and ran in all directions in pursuit of the free alcohol and parties now accessible with their first taste of undergraduate freedom. By the time Mufasa could react, police claim, there was “nowhere to run.”

While Ithaca police continue to investigate the crime, university and city officials, students, and celebrities tweeted out their condolences and asked that everyone around the world honor Mufasa’s great legacy and memory: 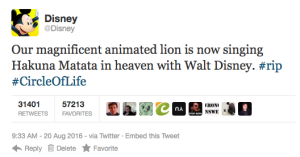 Cornellians of all creeds, colors, and species are together in mourning, but also in celebration of the inspiring life led by Ithaca’s most beloved cartoon jungle beast. We hope you and Walt Disney catch all the gazelle you desire up there in heaven.